Magpie is on her way to the Utopia, Oregon Barter Faire on the Starry Night bus when she sees a stranger limping down the dirt road with his dog. He boards the bus with a sprained ankle, three broken ribs and a secret. Tattoo artist Angeline is on her way to Utopia when she meets Magpie and her bus full of eccentric characters. Angeline is drawn to the Barter Faire and a dangerous criminal.

Cape Flattery is a historical novel set in the early 1800’s and centered around two courageous young women, Anna Teichroew and Tatiana Nikolayevna. Both characters are fictional portrayals of real people, the author’s great-grandmother who lived in a Mennonite village in southern Russia, and Anna Petrovna, the aristocratic wife of a Russian naval captain. She was the first white woman to step onto the shores of the Pacific Northwest. Intertwined with their stories is the Irish-American sea captain, Sean O’Connell. The numerous settings sweep from the steppes of the Ukraine to the palaces of St. Petersburg, Russia, from the poor Irish tenements of Boston across stormy oceans to the grandeur of Russian Alaska. The various plots twist and turn among many characters, but draw towards a dramatic climax after a shipwreck on the rocky coast of Washington State where Anna, Tatiana, and Sean meet their ultimate fates among the savage Quileute and Makah tribes living near Cape Flattery on the Olympic Peninsula.

Around the World: Steps on the Path by Robert C. Cary

At the age of seventeen Robert began exploring the world, hitch-hiking across the United States, Mexico and Europe. By twenty he had been in New York, Los Angeles, San Francisco, Munich, Mexico City, Rome, Naples and London and many places in between. He fished in Alaska and worked the harvest in Eastern Washington and Montana. He graduated from the University of Washington in Russian and Far East History. These are stories people and places he encountered as a hiker, traveler, seaman, and Foreign Service Officer of the U.S. Department of State.

Our Father’s Children by Loretta Brockhoff

Loretta’s biography of growing up on the coast of Washington State during the depression.

Second Fiddle to the Sea by Lavon Branshaw

A true adventure told by the wife of a fisherman.
This book is simply about 5 boats and a couple who married young in 1949.

He knew he wanted to be a fisherman and boat owner and she just wanted a happy home and family. It’s what happened along the way that makes the story; acquiring that first boat, starting a family, people they met, places they visited and events that occurred all unfold within the pages over a 45 year time frame.

Triumph Through Tears a Memoir by Sarah VanHorn

I shouted through the door, “Go away! I don’t want you here! Just leave me alone!”
“But Kay!” he shouted back.
Not waiting to hear his excuse I interrupted, “Your things are in those boxes at your feet! I don’t want to hear your lies and excuses anymore! Go away! Go to your whore!”
“Kay, please let me in. We need to talk about this. I don’t like shouting through the door.” “I’m tired of talking. That’s all we do and it doesn’t change anything.” My anger began to manifest through my body, which was shaking from the inside out.
“Please!” he pleaded.
Tears pouring down my face, I unlocked the door and opened it. His broad stature filled the doorway. He began to cry, “Alright, alright!” With tears on his cheeks he pleaded, “Please don’t throw me out.” His voice quivered, “I’ll break it off! I’ll never see her again.”
I felt a sharp pain shoot across my belly. “OH! GOD!” I screamed as I doubled over in pain. “The baby, the baby is coming!”

Into the Fire a memoir by Sarah VanHorn

“Open the till! Give me the money! I said, Open the till and give me the money!” the first guy shoved a paper bag at me.
I pressed the No Sale key to pop open the till. The other guy pulled a gun from his pocket and pointed it at my face, “Hurry up! Open the safe, too! I want the money from the safe!”
Terrified, I put the money from the register in his bag, “I can’t open the safe! I don’t have a key! Only the manager has a key and he’s not here.”
He threatened, “You want to die! I said open the safe!”
In a frightened panic I cried, “I can’t! I don’t have a key!”
He waved the gun closer to my face, “Get on the floor now! On the floor!” 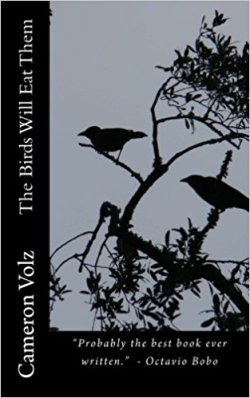 The Birds Will Eat Them by Cameron Volz

So my friend Mike comes up to me today and he says, “I got this problem.” He looks around like he’s a tough guy, like Marlon Brando would, and he tells me, “Couple weeks ago, I bought a jacket and whenever I wear it, I get this feeling like I’m someone else.” I say, “Yeah? Sometimes clothes make you feel a certain way, you know?” Mike says no. Not like that.

Cameron Volz makes his debut as an author with this book of short stories that will make you think about them long after you’ve put it down and walked away.